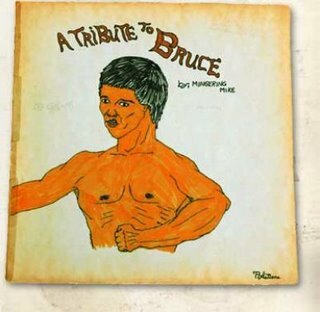 "between 1968 and 1977 mingering mike recorded over fifty albums, managed thirty-five of his own record labels, and produced, directed and starred in nine of his own motion pictures. in 1972 alone he released fifteen lps and over twenty singles, and his traveling revue played for sold out crowds the world over.


how is it that such a prolific musician has gone under the radar for the more than thirty years? the answer is that all took place in mike's imagination, and in the vast collection of fake cardboard records and acapella home recordings that he made for himself as a teenager in washington, d.c. in the late 1960s."

in addition to recently having his first art exhibit ever (in winston-salem, nc), mike has a being released tomorrow of all his artwork. all of this newfound interest in mingering mike has sparked some curiousity as to what mike's actual music sounds like. rumor has it that a cd compilation of some of his early home recordings is in the works. for now, you can stream some of mike's very interesting songs over at his . check out more of mike's art at his