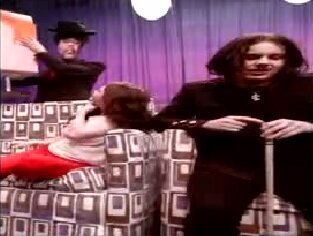 last month we wrote about the village voice writer who acted in the upcoming gondry-directed white stripes video. well guess what? it's out now and it's on google video. sadly, i have to say this is my least favorite of the gondry/white stripes videos. maybe if the video quality was a bit clearer, but from what i see the perspective distortion ended up looking like not much more than a circus funhouse mirror...

after you're done watching that, check out the new vid by my third-favorite mexican rock band, plastilina mosh-- .

and when THAT'S done, watch the video for by stephen malkmus. sounds soooo much like pavement!
(thanks, sizod.)
[]

one vote for 'baby c'mon'! rad song and video.