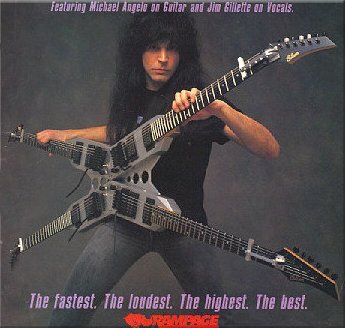 yeah, that's a real guitar. the hair, not so sure.

holding steady to his roots, superfast guitarist michael angelo batio has a new album and song sample available on his website, . you might know him as the guy who did the guitar work on the hilariously bad 80's slasher b-movie shock 'em dead. what you might not know is he and his former band nitro appeared in the hulk hogan movie suburban commandos. among his other accolades:


Guitar One Magazine voted Michael the no. 1 Shredder of ALL TIME in their April 2003 issue. Other notable guitarists that made the top 10 were John Petrucci, Paul Gilbert, Buckethead, (the late, great) Shawn Lane and Yngwie Malmsteen.

and make sure to listen to his while on his site. also, a clip from his instructional video that will definitely blow your eardrums and your eyeballs and maybe even your nuts if you watch up to the 2 minute point.