that's the best we have for battery technology? 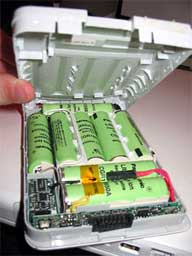 turns out i was mistaken when i thought that battery science was moving right along. wiredblogs reports a discovery that the ibook battery is . jeeeez guys, that's embarrassing!

however the hard drive scientists continue to squeeze more info into tiny crevices. Seagate just annouced the first . Its the first drive to use new "perpendicular recording" which allows for larger yet more efficient drives:

i think the "battery scientists" owe the "hard drive scientists" a round of beers for making them look like they're actually doing something good...

Found the. After reading different accounts of people who have built and replaced their batteries, this kind of put it in perspective.

"The Batteries that are in the ibook and the PBook are HiPower Lithium 3,6V 2000mAh Batteries. They go for about $10 and can be orderd at you have to rember to have Tabs put on the Batteries or you will not be abel to solder the Batteries into the Package. The powerleads are Flat flexible circitboard making it extremely difficult getting everything to fit again. Part of the Powermanager which controls how tha Batteries are charged is also in the Package. So that ist $60 (6 cells) and some sweat and you have a Replacement, with no waranty and nobody you can blame if it dosent work or kills you because you solder to hot mixed one of tha poles and the Batterie explodes in your face. But hay you just saved $ 40 if you figured your own Pay at 1 cent a Hour that is. Put those Savings in a battery that will serve another 2 years is $20 a year or one night at the Pub per year, and warranty."

T.G.--great followup, a perspective that I didn't consider. The thought of building my own battery did run through my mind after reading this but yeah prolly better left to the pros.

Mainly though, I was just really surprised that this is how these batteries are constructed. I imagined it'd be a weird gelpack or something strangely propietary like the ipod's...

Regardless, I could really use the 160gb laptop drive. I maxed out 60 immediately.