the new ipod nano is amazing but what a pity that cases are still unavailable.
amid reports of scratch-sensitive screens we propose a solution: take matters into your own hands and make your own nano case.

how it works:
1. download the nano template and print it out.
2. following instructions, cut on solid lines and fold on dotted ones.

and even better is to use the cutout as a guide to trace onto any other material. fold and tape. voila! (here’s a secret: a packet of eclipse gum is nearly the perfect size–one less piece of packaging clogging up a landfill, and no one will know what you’ve really got in your pocket.)

you can probably do better, so feel free to tweak template (.ai illustrator vector format)-mix, modify, improve. send the files and pics (sneakmove at gmail) of your achievements and we’ll put ‘em online.

need an ipod? get one here and help support sneakmove… on amazon.com

if this has been helpful to you and you’ve got some spare change laying around, feel free to donate a buck via paypal. 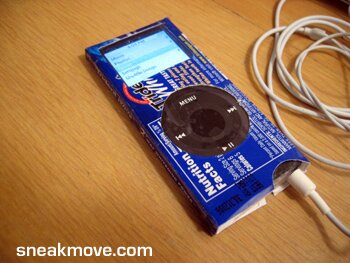 beats, remixes, and blends all mixed together for a mostly continuous dancing good time. also available as digital-only download. enjoy! $5.00

for you djs, producers and drum fanatics. 21 vintage breaks, looped up and ready to go. curated by the editors of sneakmove. this thing is getting props on from great places like xlr8r, turntable lab, etc. $6.00

an instant classic, and it's almost sold out. a very limited edition 7inch compilation featuring: odd nosdam, dat politics, languis, casiotone for the painfully alone, baby dayliner, restiform bodies, blevin blectum and more. once they're gone they're gone for good! $6.00


"we're not brainiacs on the nerd patrol" t-shirt

our tribute to stephen colbert's scathingly awesome address to george bush and the press corps at the white house press correspondent's dinner. proceeds go to
(sorry--out of print!)

***we have just a few copies left of older releases. and damn they're good... forest fires collective, jypu/mmc, substance abuse... unbeatable prices too.
check 'em all out


Become one of the Million Voices for Darfur by signing an online postcard to President Bush demanding leadership for the victims of genocide. Go to to send an electronic postcard to the White House and make a contribution to the Save Darfur Coalition.


Jump to a random article***


reading sneakmove is easier than ever with the sneakmove email newsletter!